Fox Panelist: ‘That’s What Liberals Do – They Do Race-Baiting And Class Warfare’
video

Fox Panelist: ‘That’s What Liberals Do – They Do Race-Baiting And Class Warfare’ 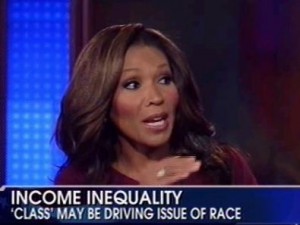 On Friday morning’s Fox and Friends, during a lively segment, Fox News analyst Angela McGlowan had some tough words for President Obama and other liberal policymakers’ political rhetoric in invoking taxing the rich in the lead-up to the 2012 elections. “That’s what Liberals do,” McGlowan exclaimed. “They do race-baiting and class warfare.”

“It’s whoever can give them solutions,” McGlowen surmised. “Independents are solutions oriented. What can you do to create a more prosperous America for me? What can you do to help my children live the American dream? And I’m sorry to say, as a registered Republican, Mitt Romney and Newt Gingrich aren’t doing it that well in fighting with each other over tax policy, or who did what with whom with Freddie and Fannie. People want results, Gretchen, I thought it was so great when you brought up earlier that you have the State of the Union address and no one talked really about policy or Barack Obama until towards the end of the debate.”

Democratic political commentator Jehmu Greene said she surprisingly agreed with McGlowen, saying that Independent voters were fair game. “You have audiences that are booing gay veterans, that are cheering on old people without health insurance and you have these candidates on the stage denying science. These are all things that they’re going to make independent voters say ‘Whoa! Wait a second.’ I mean, they are up for grabs. We’ve seen a lot of shifts and a lot of shifts from being registered Democrats in that historic election in 2008 and now they’re independents so Obama has a challenge to get them back into our camp.”