Fox’s Andrea Tantaros Tells Listeners: If You See Obama Supporters, ‘Punch Them In The Face’
audio

Fox’s Andrea Tantaros Tells Listeners: If You See Obama Supporters, ‘Punch Them In The Face’ 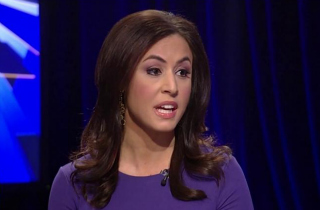 During her syndicated radio show this afternoon, conservative columnist Andrea Tantaros reacted to the Justice Department’s snooping on the Associated Press and Fox reporter James Rosen by decrying “Obama’s America” and telling her audience if they see any Obama voters, “punch them in the face.”

After listening to a clip of former New York City Mayor Rudy Giuliani rail against the DOJ’s naming of Rosen as a potential “criminal co-conspirator,” accusing the administration of purposely going after Fox News, Tantaros agreed: “That’s right. They showed their hand. They’ve bashed Fox so much, it’s so believable.”

Tantaros, a co-host of Fox’s The Five, mocked Media Matters and other liberal outlets who’ve called her cable news employer “paranoid” for thinking the Obama administration was attempting to battle with them. “Really? Are we [paranoid]?” she asked. “Let me tell you how journalists are being treated these days: They’re being stalked, they’re being spied on.”

“This is what is happening to our press,” she continued. “This is Obama’s America! It’s like the Soviet Union.” She then took aim at those who voted for “Obama’s America”:

“He said he would change the country. He said it. He said it. And a lot of people voted for him. And if you see any of those people today, do me a favor: punch them in the face.”

After the commercial break, a caller told Tantaros that he “can’t stand” Obama, but that as soon as he heard her suggest people should “punch Obama,” he immediately worried: “No, she didn’t just say that!”

“To be clear, I didn’t say punch Obama in the face,” Tantaros responded. “You’re going to get me arrested with this type of government.”

And then she re-asserted her initial request: “But if someone voted for him. If anyone that you know who voted for President Obama, smack them down.”

Listen below, via Talk Radio Network: