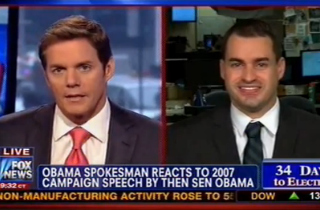 This morning on America’s Newsroom, Fox host Bill Hemmer gave a tough grilling to Obama campaign spokesman Ben LaBolt over whether or not Vice President Joe Biden‘s remarks that the middle class has “been buried over the last four years” was a mistake.

Hemmer initially asked LaBolt about last night’s release of a supposedly controversial 2007 Hampton University speech by President Obama, which the spokesman dismissed as “desperate.” The focus then turned to Biden’s comments, with the host bluntly asking whether it was a “mistake” to say the middle class has been crushed over the last four years.

“I think the Romney campaign loves to take remarks out of context,” replied LaBolt. “The vice president was clearly talking about the fact that –”

“It’s not clear,” Hemmer interrupted. “It’s not clear that he was talking about anything other than the fact that middle class Americans have suffered tremendously over the past four years.”

“Hang on a second, Ben, I’lll get to my question,” Hemmer interrupted again. “You know Americans have been struggling so hard over the past four years just to keep their heads above water. They are still swimming but, man, they had to work hard for it. And what Joe Biden said is that the middle class has been crushed over the last four years.

“And the question then is, is that because of the policies of this administration? And the comment that he made — just a clear question here — was it a mistake next or no?”

“Read the next couple of sentences,” LaBolt responded. “The vice president attributes this to passing tax cuts for the wealthiest, to stripping back oversight from Wall Street. These are the same sorts of policies that Mitt Romney would pursue now, they led to the economic crisis in the first place.”

“So to be clear: the crushing comment was not a mistake?” pressed Hemmer.

“It was a specific reference to the policies that crashed the economy and devastated the middle class and we certainly can’t return to those,” said LaBolt.

Unsatisfied with the dodgy answer, Hemmer asked again: “Alright, do you stand by it?”

“Do we think that the middle class was buried as a result of the economic crisis? Absolutely,” answered LaBolt

“Alright, I hear you,” Hemmer confirmed.