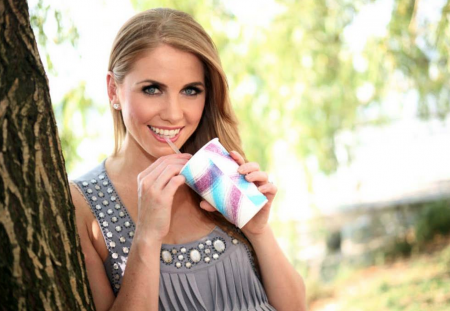 The back cover of the book included a photograph of Outnumbered co-host Sandra Smith, alongside portraits of two pornographic actresses.

Watch the clip below, via TBS:

While Smith has remained silent about the gag, Lee took to her Facebook page Wednesday morning to issue a lengthy response.

“Want the truth behind this picture?” she wrote. “It’s from an interview I did right before I got married in 2011…for a food blog,” referring to her food-centric interview with GrubStreet.

She continued with some observations on the sexualization of women in media:

As many of you have noted – I dress more conservatively than many of the women on TV. It’s a conscious, strategic decision. My theory is my body should never be more important than my body of work – and I’m not done building the latter. Quite frankly, I’ll never be. I may not be the most popular on social media – or voted the sexiest – but at the end of the day, I’ve wanted to be one thing – a journalist. And based on a series of conversations recently with young women, I see the younger generation questioning about where their priority should be – the sexy selfie or the solid resume? And you can’t blame them for being confused. Class is on short supply as a priority for young women. It’s seldom reinforced, re-tweeted, tagged or trending – but it’s the one thing that never goes out of style.

Lee ended the note with a barb aimed at the late-night host: “And now a note from someone who is actually funny: #StayClassy”