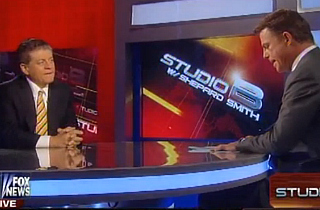 On Monday afternoon, Fox’s Judge Andrew Napolitano reacted to the news that in less than 24 hours, a military judge will read the verdict in the court martial of Pfc. Bradley Manning for what the American government describes as the “biggest leak of classified information in the history of this country,” with charges that he “aided the enemy.”

The government must prove intention to harm the United States, Napolitano told host Shepard Smith, and thus far the military hasn’t been able to counter the defense’s claims that he only sought to “embarrass the government into conforming its behavior to the laws it has sworn to uphold.”

Manning has already pled guilty to several other charges, which come with a maximum 20 years in prison, but tomorrow’s verdict will decide whether he is sentenced to life for “aiding the enemy.” Napolitano notes that the judge in the sentencing will have to decide whether Manning meant, beyond reasonable doubt, to harm the United States and provide information that could ultimately be used against it by enemies like al Qaeda.

Even after these leaks, “Will the government change its ways?,” asked Napolitano. “Probably not.”