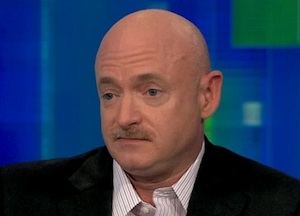 CNN host Piers Morgan spoke with Gabrielle Giffords‘s husband, astronaut Mark Kelly, on Wednesday and discussed Sarah Palin‘s controversial crosshair map, which targeted the Congresswoman’s district. Kelly wrote in a new book that the former Alaska governor never reached out to them. “We were never contacted by her,” Kelly said.

“I find that extraordinary,” Morgan exclaimed.

“Yeah, I was surprised too,” Kelly replied. “You know, certainly the targets that she put over Gabby’s and other people’s districts, in our opinion, was not the right thing to do. She is not the first person to do that. And it hasn’t always been Republicans that have done that.”

“Some interesting insights in the book into who, you know, walked to the plate and who didn’t, really, in terms of political colleagues and people that she had worked for and against. Sarah Palin doesn’t come out of this very well, I don’t think, because there was a woman who at the time had been putting these cross hair things on her website and stuff, including Gabby,” Morgan observed. “And in her haste to take responsibility didn’t even bother to pick the phone up, to write, do anything.”

“I liked your line about it, which is if you had had the chance to talk to her, and you were expecting to, you weren’t going to say that you were responsible,” Morgan pointed out. “But you were going to say, you’ve been irresponsible.”

“Yeah, that’s my plan. You know, this was no surprise to us. Gabby even spoke about it before January 8th, during the election cycle, leading up to the election, in an interview. I think it might have been on MSNBC or some other — another cable news network. She made is very clear that, hey, this is what’s going on, and this could ultimately incite people to do violent things. So it wasn’t a big surprise on January 8th that — you know, that we — you know, where we knew this map existed with the cross-hairs on it. Now, having said that, you know, Sarah Palin certainly is not responsible for what happened. But I think the angry rhetoric in an election year is not — it’s not helpful.”