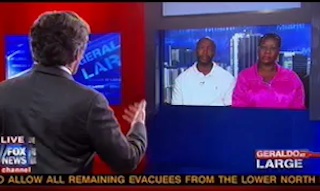 On Fox News’ Geraldo At Large Sunday night, Geraldo Rivera spoke with Trayvon Martin‘s parents and asked them for their forgiveness over his controversial comments that Martin’s hoodie was as much responsible for his death as shooter George Zimmerman. “A week ago I ranted against hoodies like the one worn by Trayvon on the evening he was shot dead by George Zimmerman because in Zimmerman’s words, ‘Trayvon looked like he was up to no good’. I said then that Trayvon’s hoodie killed him as surely as George Zimmerman did,” Rivera acknowledged. “What I was trying to do was caution parents allowing kids to wear hoodies or similar clothing in certain circumstances, particularly if they were minority young men could be dangerous. But I never intended to hurt anyone’s feelings and certainly Sybrina and Tracy, I never intended to hurt your feelings. I want to personally convey my deepest apologies to both of you. I am sorry, Tracy, if anything I said added to your misery.”

“Thank you for the apology,” Tracy Martin told Rivera. “Your apology is accepted. Let me just add one thing with the wearing of the hoodie. I don’t think America knows that, in fact, at the time of the incident when he initially made the call, it was raining. So Trayvon had every right to have on his hood. He was protecting himself from the rain. So if being a suspicious, walking in the rain with your hoodie on is a crime, then i guess the world is doing something wrong.”

Earlier in the interview, Rivera asked Martin whether he was worried the controversy over his son’s death was being split upon racial lines. “Do you worry at all, Tracy, that this case has divided the nation with black people overwhelmingly on one side and many, many white people on the other?”

“I don’t look at it like that at all,” Martin responded. “This isn’t a race issue. This is an issue about what is right and what is wrong.”

Rivera’s comments last week drew rebukes from many people, perhaps most notably his own son.

On Tuesday, Rivera told Politico that he felt his remarks distracted from the larger issues.

‘I apologize to anyone offended by what one prominent black conservative called my very practical and potentially life-saving campaign urging black and Hispanic parents not to let their children go around wearing hoodies,’ Rivera said in an email to POLITICO Tuesday.