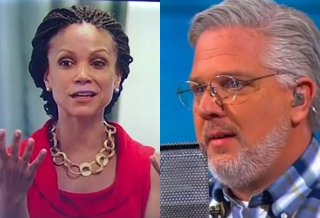 MSNBC’s Melissa Harris-Perry got an unexpected defense Monday morning from Glenn Beck, who said he did not understand why she should have felt the need to apologize for joining her guests in joking about Mitt Romney’s black grandson on her last show of the year. “She apologizes, for what?” he asked.

Beck read aloud a letter he said he attempted to send directly to Harris-Perry through his PR people, explaining that while he may not agree with many things she has said, he did not find it necessary for her to apologize for what was essentially a “break with comedians” on her show. “I disagree with her on everything,” Beck said before reading her letter, “but I don’t get the impression that she’s a bad human being.”

When he returned from vacation and saw her heartfelt apology, Beck said he thought he was going to “lose my mind.” He wrote, “Yes, it wasn’t nice. Yes, it was hurtful and divisive, if that was the intent, but it clearly was not.”

Beck added that he related to Harris-Perry’s situation, saying, “I’ve been there.” He accused conservatives of failing to see the MSNBC “for who she is, and we’re engaging now in the worst kind of political destruction… Our side sees blood in the water and is going after MSNBC.”

But Beck saved the strongest statement for the end of his letter: “In the grand scheme of things, if this is her big screw-up, she’s way ahead of me as a human being.”