GOP Rep. Duncan Tears Into Clinton, Accuses Her Of ‘Malpractice’ For Allowing Consulate To Be ‘Death Trap’ 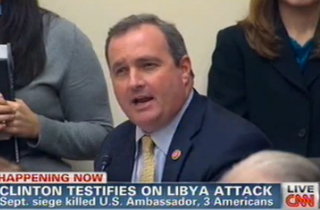 During the House Foreign Affairs Committee hearing on the Benghazi attacks, Rep. Jeff Duncan (R-SC) scolded Secretary of State Hillary Clinton for her comments during this morning’s Senate hearing and accused her of “national security malpractice” for “misleading” the public in the wake of the deadly assault.

He continued on to lambast the Secretary for her Wednesday morning remarks before the Senate: “[Americans] are frustrated when they see comments from you, ‘What difference does it make?’ I’ll tell you what difference it makes. When Americans think they were misled about something for political reasons.”

Duncan went on to note that “there was a request made for more security” at the consulate and it was denied on June 7th. “And so Madam Secretary, you let the consulate become a death trap and that’s national security malpractice,” the congressman scolded Clinton.

“This was gross negligence. At what point in time can our administration and government fire someone whose gross negligence left four Americans dead in Benghazi? What does the word responsibility mean to you, Madam Secretary?” he finally asked.

“I think i’ve made that very clear, congressman,” Clinton responded, before adding that she has made an effort to be very transparent and could have easily said “good-bye” to a notion of declassifying the Accountability Review Board. “I have great confidence that the Accountability Review Board did the job they were asked to do, made the recommendations that they thought were based on evidence, not on emotion,” she pointedly said.

“There was a lot of evidence that led up to the situation,” Duncan interrupted, before telling Clinton that despite her promises of transparency, the department has not provided call logs between the command post and operating center from the night of the attacks.

Clinton fired back that her responsibility is “to do everything I can” to get to the truth on the matter. “Going back to your first point and about the concerns of people you represented have expressed about statements that were made,” Clinton added, “I would refer you both to the unclassified version of the ARB where, after months of research and talking to more than 100 witnesses, the picture is still very complicated about what happened that night.”

“It was a terrorist motivation,” Duncan inserted before his time ran out. “It’s pretty clear what it was.”