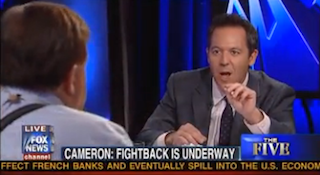 Stateside, a lot of the coverage of the London riots has been filtered through one major question: could it happen here? Today on The Five, the hosts dedicated a whole segment to this question, comparing the riots to situations like the “flash mob” problem in Philadelphia. However, in the segment before that, Greg Gutfeld made another comparison, likening the riots to protests last Spring in Wisconsin. To many this might seem like just a bit of a stretch. And Gutfeld isn’t the only conservative media figure taking that stance.

Here was what Gutfeld had to say today on The Five:

“How close did we get to the line in Wisconsin when you saw people pushing and shoving over that mess? Are we just a couple years away?”

“Pushing and shoving” does seem to be a bit of a leap to torching buildings, beating people, stealing TVs, and causing deaths. I mean, the Wisconsin protesters did leave some nasty tape on the walls.

Gutfeld joins a list with Rush Limbaugh and Glenn Beck in connecting the Wisconsin protests to the current riots in the UK.

The question here has to be, what do you think is going on in London? Is this just a bunch of hooligans taking advantage or is this a direct response to government spending cuts gone too far? If it’s the latter, then it would be possible to make some connection to Wisconsin since that’s part of what was going on there. But, again that’s only part of what the Wisconsin protesters are about (there’s also the seeming union busting Scott Walker was engaged in, etc.). And, even if you do believe the London rioters are politically motivated, cuts are only part of what has angered them (anger at the police, suspicions of racism, etc.).

Furthermore, even if these are connected in motivation, is it fair to compare a relatively peaceful protest to a city stopping, violent riot? Or is this just an attempt by Conservatives in the media to demonize the Wisconsin movement as well as connect the riots to a Liberal anti-cut philosophy?

What do you all think? Fair comparison or not?