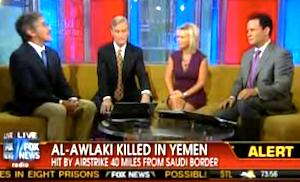 Fox and Friends anchor Gretchen Carlson was discussing the airstrike that killed Al Qaeda cleric Anwar al-Awlaki with Geraldo Rivera Friday morning, and suggested President Obama‘s opposition to Bush-era enhanced interrogation tactics would have made capturing terrorist suspects difficult. “…Under this administration, it seems that we don’t prosecute or ask the same questions that we might have under the Bush Administration so would we get anything out of him anyway if we captured them?”

Rivera had earlier mentioned the use of fingerprinting and other eye scanning technologies had made it easier to pinpoint the location of terrorist targets. “We have an inventory, a growing inventory and a pretty good idea of where they are.”

Carlson questioned Rivera whether it would’ve been better to have detained al-Awlaki as a lieutenant colonel had argued, but then pondered whether that would’ve been useful without the Bush Administration’s aggressive anti-terror strategies in place.

Rivera didn’t seem to like the direction Carlson was taking that question, “You sound like one of those enhanced interrogation people.” But ultimately, he didn’t challenge Carlson’s larger point, and said it was better al-Awlaki was dead than captured.