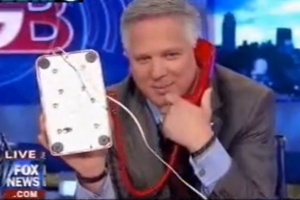 Remember Glenn Beck‘s special White House red phone, the number of which had only been given to the Obama administration, in the past year has never rang? Today, during a commercial break, the entire staff at Beck HQ held its breath as the phone began to ring for the first time. What did the White House have to say to Beck? Nothing, because the caller was Tim Griffin, a viewer who called to warn Beck that the number was visible on TV when he held the phone up.

When Beck came back from the break, he described the tension in the room as he picked up the phone and heard Griffin say “Is this Mr. Beck?” and, thinking it was “Team Obama,” was surprised to hear it was a viewer from Blanco, Texas who was able to see the number on his screen and called to let Beck know that any number of questionable viewers could have the number and cause mischief with it. “We’re going to have to change the phone now,” Beck asserted, and thanked Griffin.

It must have been a let-down for everyone on staff to wait so long for the phone to ring, only to get a random fan. But it’s also an indication of the level of loyalty that Beck can count on from his fans. Griffin saved the show from what would have inevitably been an embarrassing situation involving any number of mischievous characters from Jon Stewart to a cabal of morning zoo radio hosts– more than enough to merit some praise from the right that supports Beck. Dare I say it: Is Tim Griffin the new Joe the Plumber?