Hersh Battles CNN’s Cuomo: ‘I’m Not Out on a Limb’ on bin Laden Story
VIDEO

Hersh Battles CNN’s Cuomo: ‘I’m Not Out on a Limb’ on bin Laden Story 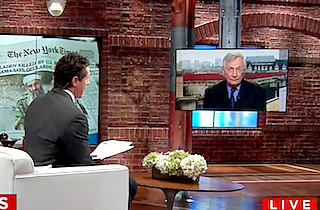 “I’ve been around a long time, long of tooth in the business, and I understand the consequences of what I’m saying,” Hersh said.

The article — published in the London Review of Books, not in the New Yorker, where Hersh is a regular contributor — alleges that the U.S. killed bin Laden with the cooperation (and payment) of Pakistani officials, and that bin Laden was being held captive by Pakistanis in Abbottabad, not hiding out. This would make the Obama administration’s account of the daring SEAL Team Six raid a fiction on the level, according to Hersh, of Alice in Wonderland.

“You have to think about this,” Hersh said. “A team of SEALS…go into the middle of Pakistan, take out a guy with no air cover, no protection, no security, no trouble. Are you kidding me?”

Hersh disputed Cuomo’s characterization of the account as based on a single anonymous source, arguing that much of the account had been independently verified. But Cuomo said their own reporting had not found Hersh’s sources to be as confident in his account, with one telling them it was merely “plausible.”

Cuomo listed the people who would have had to lie in order for Hersh’s account to be true, including the SEALS, and asked whether Hersh had “gone out on a limb” for a tall tale.

“I’m not out on a limb on this,” Hersh said, who all around seemed unimpressed with the CNN host. “I don’t mean to tell you your trade, you’ve been doing this a long time,” Cuomo said at one point, to which Hersh replied, “There you go.”