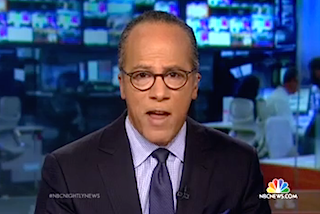 Since Brian Williams first apologized to viewers for falsely reporting about his own experience in an helicopter over Iraq in 2002, there has been little mention of the story that has dominated the news elsewhere on NBC Nightly News. But tonight, that changed.

Williams completely ignored the controversy during Friday night’s broadcast, and over the weekend he announced he was stepping aside for a short period. “In a message to his colleagues over the weekend, Brian told us he’s taking several days off this broadcast amid questions over how he recalls certain stories he covered,” Holt, who has been filling in for Williams, reported on Monday night. “In a career spent covering the news, Brian told us it’s clear he’s become too much a part of the news. He’ll be off while this issue is dealt with.”

But after NBC decided to suspend Williams for six months without pay last night, the show obviously felt it needed to address Wednesday what has become one of the biggest news stories in the country.

About halfway through the broadcast, Holt followed a piece about snow in Boston by saying, “Nw to the story many of you are talking about tonight and one that not only hits close to home but in our home. He went on to announce Williams’ suspension and read statements from NBC News president Deborah Turness and NBC Universal Chairman Steve Burke, before offering some thoughts of his own.

“If I may, on a personal note say, it’s an enormously difficult story to report,” Holt said. “Brian is a member of our family, but so are you, our viewers. We will work every night to be worthy of your trust.”

Williams supposedly temporary departure from the anchor desk has left Holt with an “enormously difficult” task. He has not been named as Williams’ permanent replacement, but is being tasked with restoring the trust the long-time anchor squandered for NBC News with his actions.