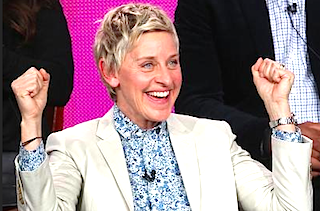 Ellen DeGeneres just happened to be appearing at the 2015 Winter Television Critics Association Press Tour on Friday when news broke that the Supreme Court will be hearing a case this term that could give marriage equality rights to all Americans. The daytime talk show host, who married wife Portia de Rossi in 2008, shared her enthusiastic reaction to the news with the crowd of reporters in attendance.

According to Deadline, DeGeneres said:

“It’s about time. The thing that changed the civil rights movement was when white people got involved and started marching. We need everyone on our side. We’re kind of trying to do this march, and we need people that believe in equality and believe in fairness and love. If we have people that will join us and give us that, which is only fair to have the same rights as everybody else, then it’s a wonderful world.”

RELATED: Ellen Fires Back at Christian Post for Accusing Her of ‘Celebrating Lesbianism’

DeGeneres was at the event to promote her new NBC series One Big Happy, which stars Elisha Cuthbert as a gay woman who decides to have a baby with her straight male friend.

“We’re setting out with a lesbian as a central character, so it’s not a surprise,” DeGeneres said, before referring to her 1990s sitcom. “So nobody’s going to freak out, versus then, when it freaked out everybody — because nobody had a clue I was gay.”