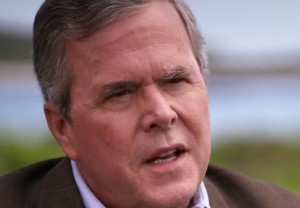 Former Florida Governor and current Republican presidential drop-out Jeb! Bush has been granted another moment in the sun thanks to the impending Republican National Convention and MSNBC’s desperation to fill an entire hour, and he took full advantage of it to demonstrate why he went from prohibitive favorite to sad-sack Conceder-in-Chief. During former Sarah Palin spirit animal Nicolle Wallace‘s exclusive interview, Bush spent a lot of time talking about where it all went wrong, and how he can’t possibly vote for Donald Trump, but the most telling snippet was his attempt to take the measure of an eventual Trump presidency.

While many observers find a Trump presidency terrifying for what the unhinged media mogul might do to our country, Governor Bush told Wallace that the real “tragedy” is that Trump won’t be able to do the terrible things he promises to do:

Now, I guess we all know what he meant, sort of, which is that people who really wanted to ban all Muslims and build a wall to keep out the Mexicans will be really hurt and disappointed, but that’s also not a tragedy, certainly not if you’re a person who feels those policies are wrong, which Jeb is supposed to be. Even now, though, he’s afraid to alienate all those people who already didn’t vote for him by recognizing that Trump’s policies are the betrayal, and his supporters’ lust for them is the tragedy.

As for MSNBC’s treatment of this interview, I think most observers would concede that a Jeb Bush interview so close to the convention is newsworthy, but if they’re going to give a distant also-ran the haul-Brian-Williams-and-the-team-out-of-bed-for-a-one-hour-special treatment, then they at least owe us a sit-down with Jim Webb, and its political team some bonus pay.