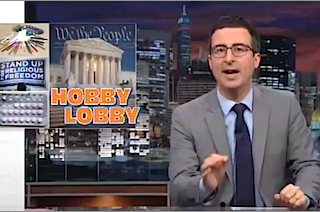 This morning, the Supreme Court ruled in favor of the Hobby Lobby corporation, declaring that closely-held companies can not be compelled to pay for certain contraceptives for employees. But before the decision came down, John Oliver weighed in on the case during Sunday’s episode of Last Week Tonight. Likening the tax benefits that come along with a company’s decision to provide health care to employees to a salad bar, Oliver argued that Hobby Lobby should not be able to use government as an “à la carte” system.

On the fundamental question of the case — whether a corporation can be considered a person able to exercise religious rights — Oliver answered for the court. “No, they’re not. Are we done here?”

What Hobby Lobby’s owners are arguing, according to Oliver, is that “the sincerity of their beliefs should allow then a line-item veto over federal law.” But, he added, “government is not an à la carte system where you can pick and choose based on your beliefs. Taxation is more of an all-you-can-eat salad bar. You don’t get to show up and say, ‘Look, I know it costs $10.99, but I’m only paying $7.50 because I have a moral objection to beets.”

As Oliver explained, when it comes to taxation, “everyone has their own version of beets,” that one thing you just don’t agree with but are forced to pay for anyway, be it abortion, war or even a shrimp running a treadmill.

“If you really want to be treated like a person, corporations,” Oliver said, “then guess what? Paying for things you don’t like is what it feels like to be one.”