John Oliver Tells SC Where It Should Stick Its Confederate Flag 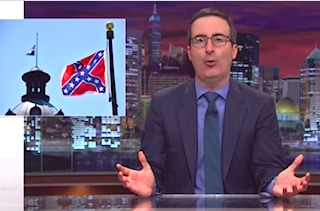 On President Barack Obama’s reaction to the attack, Oliver said, “He sounds completely defeated,” something the host said was “understandable” given how many times he has had to deliver similar speeches following mass shootings. “It’s like watching your father cry for the first time,” he said.

“It is pretty clear nothing is going to be done about how this tragedy was committed, which might explain why some are focused on symbol associated with why it happened,” Oliver continued. With the Confederate flag flying at “full staff” over the South Carolina Capitol, he wondered “why it was flying at any staff at all.”

Following Sen. Lindsey Graham’s admission that the flag has been “used by people in a racist way,” Oliver asserted, “Yeah, it has, in fact I believe the first time the Confederate flag was used in a racist way was the exact second they finished sewing the very first one.”

To the people of South Carolina, Oliver had this suggestion:

“Now might be a great time, out of respect not just for the events of this week, but for the events of the past several centuries, to take that vote and lower the flag down to half staff, and then when it’s at half staff, why not keep lowering it all the way down, and once you’re holding it in your hands, take it off the flag pole completely, fold it, or don’t bother, put it in a box, label it ‘bad flag’ and put it somewhere no one can see it.”