John Oliver to Jorge Ramos: Calling Me a Journalist Is an ‘Insult’ to Journalism
VIDEO

John Oliver to Jorge Ramos: Calling Me a Journalist Is an ‘Insult’ to Journalism 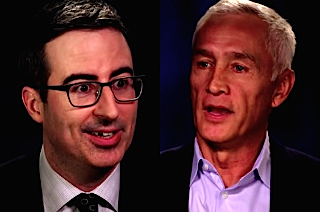 After Oliver landed a rare face-to-face interview with Edward Snowden, an unnamed source close to the NSA whistleblower told CNN’s Brian Stelter, “The reason why we chose John Oliver is because of his journalism.”

“I’m not a respected journalist,” Oliver told Ramos when he brought up the issue. “I’m doing the job of a comedian. So, I make jokes about the news.”

Ramos pushed back, telling Oliver, “You have more credibility than most journalists here in the United States and, I would say, in many other countries.”

“But that is more an insult to the current state of journalism than it is a compliment for the state of comedy,” Oliver replied, a point to which Ramos quickly agreed.

Oliver also addressed the slowly elongating length of his show’s main segments. “We thought ten or twelve minutes would be pushing it,” he said. “We thought that would be comedic suicide. Now, lots of them are actually getting closer to 20. I don’t think anyone in their right mind would say, why don’t you do 15 minutes of jokes about the privatization of America’s prison system?”

Watch the full interview below, via Fusion: