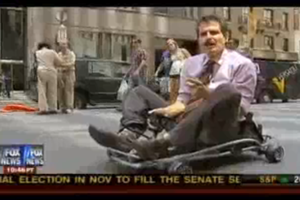 John Stossel‘s libertarian fury has landed today on frivolous warning labels– things like “do not eat” on printer cartridges and warnings on go-carts that, when turned on, they may move. Most of these ridiculous labels are the product of frivolous lawsuits that, according to Stossel, our government is too lenient with. To prove this point, of course, Stossel presented the most important piece of evidence in the story backing his claim: a go-cart.

On his regular visit to America Live, Stossel brought a pre-taped package of him wandering the streets of New York in his go-cart rather slowly, and asking passers-by about the warning labels on it. The go-cart was essential to making this point, you see. While he didn’t ride it into the studio, unfortunately, he did lend it to someone else to ride around the show while he and Megyn Kelly debated. Kelly found herself in a fairly awkward position as a lawyer, given that the entire premise of Stossel’s argument was that lawyers were hurting America, or, in other words: “We need you lawyers the way we need nuclear missiles. Because we want lawyers to keep us safe, but we avoid using our missiles.”

Kelly countered with various examples of lawsuits that were completely legitimate, especially when people are injured by the negligence of a person or company with more economic power than they have. Stossel conceded this point, admitting that he did think lawsuits were sometimes useful, like when “I sued when I got beat up by a wrestler.” Then the man in the go-cart zipped by Kelly and Stossel once again.

Which brings up a much more interesting question than how much money lawyers have cost the nation in frivolous lawsuits: How much money has John Stossel cost News Corp in frivolous props? There was the green phone, the ball and chain, this motorcycle, the”tiny carp” for the “fish pedicure“– oh, and let’s not forget the free golf carts from the government! And he’s only been there for less than a year!

Video from today’s America Live below: