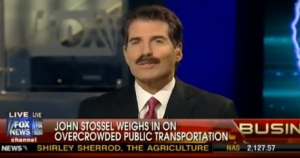 I like John Stossel because he’s clearly not a hypocrite. He’ll take his Libertarian views to the logical end (in an unrelated note, the stoned, porn-loving prostitute who I dictate my posts to likes him as well). However, at this point, it seems like he has to be joking. While someone could disagree with his belief that the world would be safer if we were all packing heat, it still would sound like something that a reasonable person might think. However, arguing that, say, a jam packed intersection in New York would be safer if we didn’t have traffic lights is just one notch south of absolutely insane.

Seriously, this segment feels like the best parody of a Stossel/Megyn Kelly conversation that SNL never produced. It’s got all the trademarks we love from their segments (Kelly enjoying Stossel’s name, Stossel proposing something all libertarian, Kelly disagreeing, Stossel acting bemused that anyone would even try to argue his salient points) only the whole thing is just bizarre. For proof of his point that we’d be better off without stop signs and traffic lights, Stossel then showed a hilariously terrifying clip of an old man not getting run over in Holland. Normally I’m in the Stossel camp during these debates, but consider me on Team Kelly today.

Really though, it’s possible that Stossel was just saying all of these things so as to carve out a place on fellow traffic stop-hater Basil Marceaux’s inevitable presidential campaign.