Jon Stewart Tears Into Obama Hypocrisy And Secrecy On Drones: Only Transparent ‘About The Last Guy’s Secrets’ 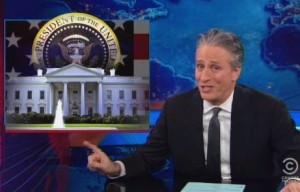 Jon Stewart wasted no time tonight in lambasting President Obama over the secret drone strike memo released earlier this week. Stewart contrasted Obama’s previous desire for transparency in releasing torture memos from the Bush administration with the current reluctance from the administration to release its memos on how the U.S. gets to rain hell from above with a “missile robot plane.”

RELATED: GOP Sen. Graham Defends Obama’s Drones: ‘Every Member Of Congress Needs To Get On Board’

Stewart was relieved that the Obama administration is only going to kill you if you’re part of al-Qaeda or its many subsidiaries, including “Euro al-Qaeda” and “Chipotle.” But he couldn’t wrap its head around the tortured language the administration is using to define an “imminent threat,” because they do not need any actual evidence of said threat, so basically Stewart said the threat can be “imminent or not imminent.”

Stewart found the entire memo to be “somewhat loosely defined,” especially considering that citizens targeted don’t get any kind of notice about their placement on the list. However, Stewart expected the Obama administration to release all the memos, because not only did he eagerly release torture memos from the Bush administration, but “he invited everyone to his memo release party.”

Stewart then showed how Press Secretary Jay Carney tried to play a “Jedi mind trick” on the press corps by trying to avoid saying whether the administration would release the memos or not. Stewart concluded that the only difference between Republican secret extrajudicial memos and Democratic ones is that at least Democrats use recycled paper for theirs.

Stewart concluded by pointing out how David Axelrod said the Obama administration was okay with releasing the torture memos after the government stopped torturing to get in one last swipe at the president.

“We don’t mind you knowing about shit we do once we don’t do it anymore. We’re happy to share irrelevant information with the public. We told you we were going to be transparent, we just didn’t tell you it was going to be about the last guy’s secrets.”