Jonathan Gruber to MSNBC: My ‘Stupidity of the American Voter’ Remark was Inappropriate
Video

Jonathan Gruber to MSNBC: My ‘Stupidity of the American Voter’ Remark was Inappropriate 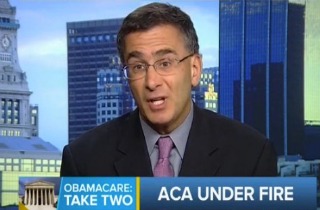 Jonathan Gruber, MIT professor and so-called architect of Obamacare, is walking back year-old remarks that the health care system overhaul passed only because of a “lack of transparency” and the “stupidity of the American voter.”

On MSNBC Tuesday, Gruber told Ronan Farrow that he “spoke inappropriately” when he made the comments, which surfaced this week in an online video.

“The comments in the video were made at an academic conference,” Gruber said. “I was speaking off the cuff and I basically spoke inappropriately and I regret having made those comments.”

Farrow suggested to Gruber that the underlying point of his remarks was actually “nuanced” and was intended to illustrate that in order to effectively pass Obamacare into law, the process needed to be “opaque.”

Gruber replied that he was trying to convey that laws that center on federal spending aren’t popular.

What Gruber said in the video:

This bill was written in a tortured way to make sure CBO did not score the mandate as taxes. If [Congressional Budget Office] scored the mandate as taxes, the bill dies. Okay, so it’s written to do that. In terms of risk-rated subsidies, if you had a law which said that healthy people are going to pay in -– you made explicit that healthy people pay in and sick people get money — it would not have passed… Lack of transparency is a huge political advantage. And basically, call it the stupidity of the American voter, or whatever, but basically that was really, really critical for the thing to pass. And it’s the second-best argument. Look, I wish Mark was right that we could make it all transparent, but I’d rather have this law than not.