Karl Rove: Hillary Trying to Be ‘Goldilocks of Foreign Policy’ 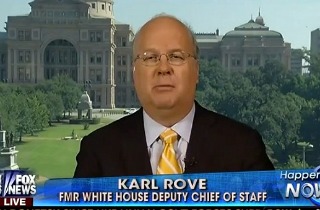 In the interview, Clinton is quoted as saying of American foreign policy: “You know, when you’re down on yourself, and when you are hunkering down and pulling back, you’re not going to make any better decisions than when you were aggressively, belligerently putting yourself forward.” The quote continues: “One issue is that we don’t even tell our own story very well these days.”

Rove told Happening Now that Clinton is “trying to position herself as sort of the Goldilocks of foreign policy.”

For the unfamiliar, Goldilocks is a fictional character in an old children’s story about a little girl who invades the home of three bears. She tests the bears’ food and beds until she finds one that’s “just right.”

“She’s not going to be as belligerent as [former president George W.] Bush or as overly cautious as (President Barack) Obama,” Rove said of Clinton’s quote. “I thought that was a very interesting, completely political revision of both the current administration and the previous administration. But she’s trying to say, ‘I’m going to be Goldilocks.'”

“You cannot be a strong foreign policy leader for the United States unless you have ultimate confidence in the goodness of the American experiment and of our influence in the world,” he said. “That’s often times been lacking in the current administration.”