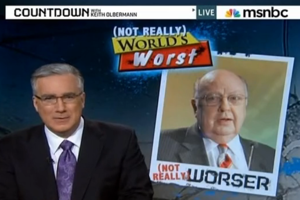 Judge Andrew Napolitano has taken his firebrand libertarian show, Freedom Watch, to the big leagues, anchoring the most expensive real estate on the Fox Business Network– and it took less than a month of free market values and government distrust for Keith Olbermann to be calling for his dismissal. The issue? Napolitano really doesn’t trust the government, whether it comes to taxes, social programs, or, uh, who was really behind 9/11.

Napolitano visited controversial radio host Alex Jones‘ program recently and– not for the first time– suggested that the September 11th attacks “couldn’t possibly have been done the way the government told us.” Olbermann doesn’t take any particular issue with the comment, noting with some apathy, “I don’t have to agree with him, you don’t have to disagree with him.” In fact, Olbermann doesn’t even give Napolitano a coveted “Worsts” medal– that honor goes to his boss, Roger Ailes, for not firing Napolitano.

So why does Olbermann want someone whose comments he doesn’t mind to lose his job, which happens to be hosting a show in the same genre and in the same time slot as Olbermann? For the sake of consistency. “Put your outrage where you money is,” he told Ailes, noting that other Fox News personalities like Glenn Beck, Bill O’Reilly, and Sean Hannity had called for Van Jones to be fired and Imam Faisal Abdul Rauf to lose his license to open an Islamic center in Lower Manhattan for similar comments. Imam Rauf wasn’t even the source of his own offensive comments– it was an underling. Since others on Fox News criticized these individuals for 9/11 “truth”-related comments, Olbermann concludes, Napolitano merits the same treatment.

The difference, of course, between individuals like Jones and Rauf and television personalities like Judge Napolitano is that the latter has no direct influence on government or policy. The job conservatives were so upset to see Jones hold gave him the power to advice the nation’s chief executive. Imam Rauf– knee-deep in controversy for issues having nothing to do with trutherism– is in charge of a major downtown Manhattan project. Judge Napolitano, on the other hand, is paid for his opinions. He is not paid to generate policy or execute projects based on those opinions– his only responsibility is to be interesting and, for the picky cable news viewer, consistent. There is nothing inconsistent about someone whose philosophical foundation is distrust in the government to express unease with certain statements the government has made. To Olbermann’s credit, he takes no issue with Napolitano himself. But to dump Napolitano in the same boat as Van Jones is to thoroughly misunderstand the arguments that Beck, O’Reilly, et al made during the “Czar” saga. So long as Napolitano doesn’t find himself in the President’s cabinet, there is little reason for his colleagues to demand a pink slip.

The segment from tonight’s “Worsts” via MSNBC below: