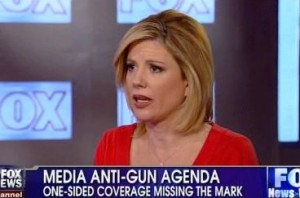 The top story on Saturday’s edition of Fox News Watch concerned the media’s treatment of the gun control debate, and in particular Megyn Kelly‘s interview with NRA executive Wayne LaPierre Thursday. Contributor Kirsten Powers commended the Fox host for grilling LaPierre on his organization’s opposition to policies like expanded background checks and magazine limits that gun control advocate believe could save lives.

“Megyn Kelly really grilled him and did a great job,” Powers said about the LaPierre interview. She added that LaPierre “doesn’t come off as an honest broker to me” given his clear agenda to “fight any kind of gun control at every turn.”

“I don’t know why he’s supposed to be treated like he’s somebody who’s really trying to solve the problem, when in fact he just has his agenda,” Powers said. “Even when Megyn really pinned him down” about the 11 Sandy Hook Elementary School children who parents believe would have been killed had Adam Lanza not had to change magazines when he did. “Wayne LaPierre never answered that question, he just gave talking points.”

In response to this, host Jon Scott brought up pro-gun Newtown parent Mark Mattioli, who Mediaite’s Tommy Christopher recently discussed in a column that asked why the mainstream media appears to be ignoring him. Scott pointed out that Mattoli has been “applauding the NRA” but “because he isn’t touting the line that most in the press seem to like, his story didn’t get too much attention.”