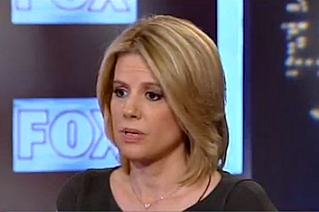 Fox News analyst Kirsten Powers dissented from the majority opinion on this Saturday’s Fox News Watch, arguing that Edward Snowden’s leaks have not compromised the United States, and refusing to condemn him as a “naive narcissist” along with the rest of the panel.

After Judy Miller and Jim Pinkerton had welcomed Snowden to celebrityhood and compared him to disgraced communist spies, respectively, Powers stood up for the NSA leaker (and has been consistently clear-eyed about the story since it broke):

“His complaint is completely valid. People are focusing on things that—whether he was a high school dropout or his girlfriend—things that have nothing to do with the issue in an attempt to smear him. Even this narcissistic thing, it is like—I guess you should have gone into TV or something. We work in the most narcissistic industry in history, sitting around pointing fingers at this guy who basically gave up everything, you know, and had to flee the country because he thought it was so important to expose the information—which has not caused any damage to the United States. That’s the other thing: we keep hearing about all this alleged damage that has been done. But lot of good has already been done.”

“He signed up to spy, though,” foreign policy spokesman Richard Grenell said. “He signed up to work for the NSA, and to do a job that he knew exactly what he was going to do. Nothing changed. What changed is his comfort level with spying.”

“Just because you are working in the NSA does not mean you have signed up to what the administration was doing in terms of surveillance,” Powers said. “He’s a whistle blower.”

“That Schieffer analogy is the worst analogy in the world,” Powers said. “MLK and Rosa Parks did not have the U.S. government chasing them for giving secrets. That’s ridiculous.” After it was pointed out that the government was wiretapping Dr. King (actually it was J. Edgar Hoover, which was not quite the same thing), she responded, “The government was harassing them. [Snowden] did something against the U.S. government and had to flee. That’s a completely different situation.”