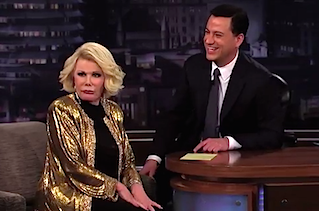 Comedian Joan Rivers, who died Thursday at the age of 81, was the first woman to host a late night talk show with the short-lived Late Show Starring Joan Rivers on Fox. Before that, she was a regular guest host for the Tonight Show Starring Johnny Carson, but was famously banned from that show for striking out on her own until Jimmy Fallon welcomed her as one of many celebrity guests on his debut earlier this year.

Late night is still a boy’s club, but last night, one by one, those boys paid tribute to the “trailblazing” Joan Rivers and everything she stood for in comedy.

David Letterman: “Here’s a woman, a real pioneer for other women looking for careers in stand-up comedy. And talk about guts — she would come out here and sit in this chair and say some things that were unbelievable, just where you would have to swallow pretty hard, but it was hilarious… The force of her comedy was overpowering.”

Jimmy Fallon: “It was really emotional and really nice. I don’t want to show a clip because I don’t think it will do her justice… We loved her. We will definitely miss her.”

Jon Stewart: “There are very few people in my business who you could say are, or were, actually groundbreaking talents. Joan Rivers was one of them.”

Craig Ferguson: “We lost Joan Rivers today, one of the all-time greats. Yes, I know, it’s terribly sad. I just hope that when Joan meets the man upstairs he is wearing something she can insult.”

Conan O’Brien: “At that time she was so outrageous and her comedy — it felt so out of the bounds and people were just blown away.”