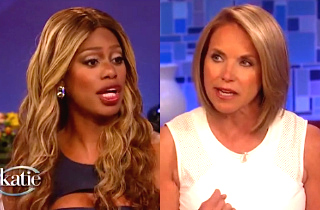 The first time transgender actress Laverne Cox appeared on Katie Couric’s daytime talk show, things did not go very smoothly. Couric pointedly asked Cox about her anatomy and the actress responded by explaining that the “preoccupation” with transition and surgery “objectifies” trans people and prevents them from discussing their broader experience.

In their new interview, timed to coincide with Cox’s Time magazine cover and the premiere of Orange Is The New Black’s second season, Couric addressed the controversy head-on. She explained that after the last time Cox was on the show she “got a lot of flak” for asking about the “physical aspect” of the transition process.

“I learned that it’s very, very upsetting to the transgender community because they feel that people are too often fixated on this and that your anatomy actually has very little to do with your gender identity,” Couric said, displaying her newfound knowledge on the issue.

“That’s great, Katie,” Cox responded, saying she appreciates Couric’s “willingness” to have her back on the show to explore these issues with more depth and “learn out in public.” Cox said she was excited to come back in order to demonstrate how to have safe conversations about these complex issues.

“I commend you on really being teachable,” Cox added, “because not everybody is.”

From there, Couric said she was willing to hold herself up as an example of “what you shouldn’t do.” At the same time, she said was “proud” of her show for creating that safe place to explore issues like this one.

Couric concluded by expressing how much she “admires” Cox for becoming “such an eloquent advocate for so many people.”

Watch video below, via Katie: