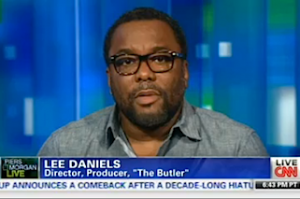 Oprah Winfrey has been facing sharp criticism for her comments on race in recent weeks, but tonight on CNN, the director of her new film The Butler sat down with Piers Morgan and was faced with what he described as a “powerful question”: “Do you think that America is a more or less racist country since Barack Obama became president?”

“I think that people are angry that he’s president and I think that they are showing their true colors,” Daniels said. He described how in the world of his historical film, “any black man could be killed by any white man and get away with it,” and that was before Trayvon Martin. Daniels said despite the fact that he ends his film “with hope,” when he walked out of the editing room and learned about Trayvon Martin, he realized that “sadly” we do still live in a very racist country.

Morgan also talked to one of the film’s co-stars Lenny Kravitz about the issue of racism in light of The Butler and Winfrey’s recent revelations about experiencing racism. Kravitz said that growing up he did encounter racism, but asked, “has the world gotten better in general? Yes.”

Another co-star, Cuba Gooding, Jr., offered his advice to any young African-Americans who feel “disenfranchised.” He said he thinks “there’s been a real disconnect with the civil rights movement and the history of it and I think this movie opens that dialogue so that you can make your decisions as an African-American or an American.”