Maddow Fires Back at Rand Paul: He’s a ‘Petulant Person Who Lies’
video

Maddow Fires Back at Rand Paul: He’s a ‘Petulant Person Who Lies’ 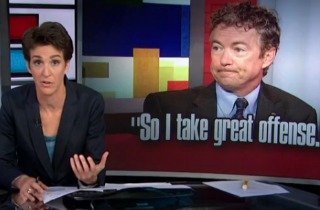 Ever since Rachel Maddow squared off with Rand Paul four years ago over his views on the Civil Rights Act, she has, on occasion, called Paul out when he claimed he never objected to any part of the Civil Rights Act. But yesterday, after Paul roasted MSNBC for giving him hell over this for so long when they could tell the truth instead, Maddow really couldn’t let that go. She closed out her show last night really tearing into Paul for now just brushing their interview aside as if it never happened.

Maddow said that when she had called Paul out for plagiarism, he exhibited a rather unbecoming temperament and “lied” when he was caught. And contrary to what Paul said at the time about MSNBC, Maddow said that “nobody is hating on you,” it’s a matter of him being wrong.

As for the Civil Rights Act controversy, Maddow was amazed that Paul’s strategy is now all about calling her and others haters. She said, “You cannot base a presidential campaign on something that is not true about yourself or try to cover up something that you have said now that you don’t like the way that sounds.”

And you can watch Paul’s MSNBC appearance yesterday here: