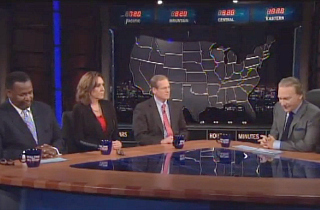 Friday evening’s Real Time spent a great deal of time dissecting the question of race in America, particularly in light of the domestic abuse stories emerging about various NFL players. Ultimately, the panel concluded, such violence is not exclusive to the black community, but racial myths have allowed such a stereotype to develop.

“The image of the violent black man has been perpetuated for a long time,” lamented actor Wendell Pierce. “It’s not a black thing; white people beat their kids, too.”

When outgoing Rep. Jack Kingston (R-GA) noted that he sees a distinct difference between “spanking” and “whipping,” Maher interjected that it’s perhaps a southern, Bible Belt phenomenon. “So many horrible fucking ideas in the Bible,” he said.

When the topic turned to new video of witnesses in Ferguson, Mo., corroborating the story that 18-year-old Michael Brown had his hands up while being shot by police, Maher said: “I don’t think we need new laws, I don’t think we need reparations. I just think white America needs to stop putting forth the toxic idea that racism is over.”

Pierce added: “The fact is… when the lights go out, and I go out on the street, and I get behind the wheel of my car, the most dangerous moment I ever have in my life is when the police officer pull me over.”

Watch the full segment below, via HBO: