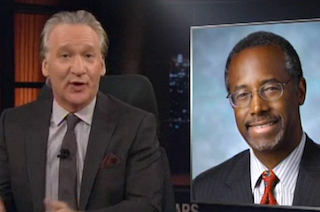 During his New Rule segment on Saturday night, Bill Maher savaged the “the resurgence of the smart/stupid person,” namely, otherwise accomplished members of scientific or intellectual fields who nonetheless have the zaniest ideas when it comes to politics.

Maher’s first example: Eben Alexander, author of the book Proof of Heaven. He wondered “how a neurosurgeon of all people could say that he made a day trip to heaven while in a coma, when his scientific training—not to mention every other scientist in the world—is telling him, ‘No dude, you were just tripping. Those coma drugs are good shit’…Hey doc, come by the show sometime, I’ll give you some bad acid and you can visit hell.”

But Maher saved his real vitriol for Dr. Ben Carson, a rising Republican star whose ultra-conservative beliefs—which range from linking homosexuality to bestiality to believing the world is only several millennia old—have been causing him some problems.

“He’s half brilliant brain surgeon, half tea party dumbass,” Maher said. “He doesn’t just operate on conjoined twins, he is one.”

“There’s no more attractive figure in the Republican Party these days than an anti-intellectual with an advanced degree,” Maher said, noting other figures like Antonin Scalia, Ted Cruz, and Bobby Jindal, “who are accomplished scholars on the outside, and on the inside a creamy layer of Michelle Bachmann.”

“Why are we electing so many gynecologists to Congress?” Maher said. “If having your head between a woman’s legs is a qualification for public office, then why not Congressman Michael Douglas?”