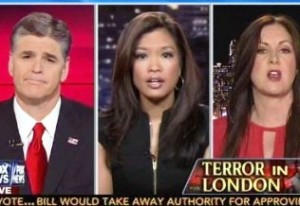 Sean Hannity tonight led a heated panel discussion on the horrifying terrorist attack in London today. He and Michelle Malkin credited Prime Minister David Cameron with immediately labeling it a terrorist act, saying that liberal political correctness would have prevented that if such an attack occurred in the United States. Malkin got into a shouting match with fellow panelist Leslie Marshall over how the U.S. has responded to acts of Islamic violence, going so far as to say political correctness on Islam leads to dead bodies.

Hannity doubted that had this attack occurred in the United States, the government would not have quickly labeled it a terrorist attack as it was in England. Malkin agreed, blaming political correctness in the United States. She mockingly asked, “What do you need to have? Neon lights that say ‘Islamic jihad!” Malkin said that British progressives “brought it on themselves” due to “lax deportation policies” and an “unwillingness to screen out and profile Islamic militants.” Hannity noted that England has strict gun laws, and wondered if the victim would have been able to defend himself if he had one.

Hannity brought up how the government’s reaction to the Fort Hood shooting cited “workplace violence,” and asked if they need to start “calling things what they are.” Marshall dismissed the semantic argument and scolded Malkin for suggesting that progressives in England basically brought this upon them. She asked, “Does it matter that they’re terrorists?” Hannity and Malkin both answered affirmatively, with the latter firing back that “it is not word games to call things what they are.”

Malkin railed against liberals and the Obama administration for not being honest about acts of Islamic violence, and got in a brief shouting match with Marshall when Marshall insisted she always believed Fort Hood was a terrorist attack. Malkin argued that political correctness over labeling terrorist acts has very damning consequences.

“Those kinds of PC policies, lax immigration policies, refusal to do Islamic militant profiling has, yes, led to dead bodies in America and around the world. The sooner we reckon with it, the safer we’ll be.”