Marie Harf to Critics: Maybe My Comments Were ‘Too Nuanced’ for You 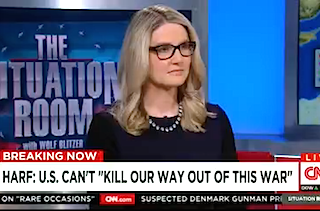 “We cannot kill our way out of this war,” State Department spokesperson Marie Harf told MSNBC’s Chris Matthews “We need in the medium to longer term to go after the root causes that leads people to join these groups, whether it’s a lack of opportunity for jobs.” Ever since, she has been getting hammered by conservatives on Twitter and elsewhere across the web.

Tonight, she joined Wolf Blitzer on CNN’s The Situation Room and attempted to clarify her point.

“I’m not the first person to say something like this,” Harf said. “Military commanders that we’ve had throughout many years here fighting this war on terrorism have said the exact same thing, that in the short term when there’s a threat like ISIL. We’ll take direct military action against these terrorists. We have done that. We are doing that in Iraq and Syria. But longer term, we have to look at how we combat the conditions that can lead people to turn to extremism.”

“So you suggested that maybe if you find these young men jobs, they might not become terrorists?” Blitzer asked, echoing her critics, prompting Harf to call his statement a “gross oversimplification.”

“We cannot kill every terrorist around the world, nor should we try,” Harf said later. “How do you get at the root causes of this? It might be too nuanced an argument for some, like I’ve seen over the last 24 hours some of the commentary out there, but it’s really the smart way that Democrats, Republicans, our partners in the Arab world think we need to combat it.”

Asked how she’s dealing with the criticism she has been receiving for her comments, Harf said, “I don’t read it.”

But she has used Twitter to demonstrate that others who came before her have made similar arguments in the past, including some notable Republicans:

And let's not forget George W Bush's comments on CVE: “We fight against poverty because hope is an answer to terror": http://t.co/Du68tsrjHd

1 more (of countless others): Colin Powell on fighting terrorism not just w/military means but by combatting poverty: http://t.co/37F3ePwvhZ