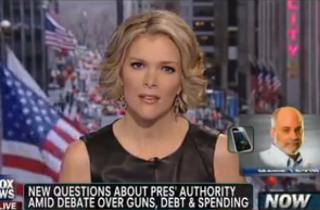 Conservative radio host Mark Levin appeared Fox News’ America Live this afternoon to discuss how his “fury” over President Obama‘s “tyranny” in his use of executive orders.

“He keeps telling us he won re-election,” Levin said of the president. “Congratulations! But guess what, the Constitution wasn’t up for election, it wasn’t for a referendum,” he continued, before rattling off the list of ways he believes the president has expanded his office into an “imperial presidency,” including “unilateral action” on immigration, the tax implications of ObamaCare, “attacks on religious liberty,” and the potential use of executive order on gun control.

“What the hell is this?” Levin continued. “He was elected president. Congratulations. This guy makes Richard Nixon look like a man who followed the law all the time. I think we have an imperial president. He sounds imperial, he’s arrogant as hell and I’m furious about this.”

Host Megyn Kelly pushed back that many also found Obama’s Republican predecessor George W. Bush to be “imperial” in his presidency, vastly expanding the powers of the executive branch.

Levin didn’t like the comparison: “People better wake up to this. This is not what Bush did or what anybody else did. This president is different and in a very, very negative way and the fact that a lot of people voted for him, that’s extremely troubling, but the Constitution, as I said, that wasn’t up for grabs and it’s still not up for grabs.”

The syndicated radio host then continued on to lambast the “pretend media” for assisting Obama’s “big lies” including the precedence for invoking the 14th Amendment in the debt ceiling negotiations, the limitations of the Second Amendment, and the idea that government can prevent more shootings like Sandy Hook. “You would think that the Constitution is just another statute for these guys to play with,” Levin said. “This is why I’m furious. Once we lose the Constitution, and we’re losing it big, what’s left? How do we keep these people in check?”

He concluded by saying it will “not be very pretty” if Obama invokes executive order in dealing with gun control.