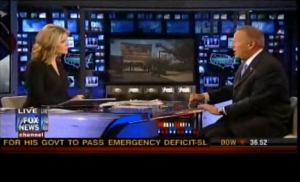 On this afternoon’s America Live, Megyn Kelly spoke with conservative radio host and Fox News contributor Mike Gallagher about the decision to allow the members of Westboro Baptist Church radio airtime for agreeing not to demonstrate at the funeral of nine-year-old Arizona shooting victim Christina Taylor Green. Kelly asked whether giving this group a platform on two conservative Christian radio stations was, in essence, rewarding them for their bad behavior – behavior such as protesting at funerals for fallen soldiers carrying signs reading “Thank God for Dead Soldiers.”

Gallagher viewed the deal as something of a necessary evil to prevent an even greater evil from having transpired. “I think any American,” he said, “if they had the tool at their disposal to prevent these grieving families from being subjected to these vile people… Who wouldn’t do this?” Gallagher then said he views the Westboro Baptist Church as neither Baptist nor a Church but, rather, an extended family (the Phelps family, specifically) with a mission. A family, Gallagher pointed out, made up of First Amendment lawyers.

Gallagher added that an hour of airtime on his station this coming Monday is “insignificant” compared to the fallout the group may have caused had it gone through with its plans to protest Cristina’s funeral. As for arguments that giving the group airtime only encourages them or ends up amping up the “vitriolic rhetoric” so often mentioned in the wake of this weekend’s shooting, Gallagher said the Church will be “challenged” by noted Christian public speaker Dinesh D’Souza of New York’s King’s College. In a manner that is neither vitriolic now sensational, one hopes.

As it turns out, this decision is something of a personal one for Gallagher, who shared with Kelly that the Westboro Baptist Church had been toying with the idea of protesting his own wife’s funeral. It is perfectly understandable, then, that he would strike a deal to keep the group from causing further anguish to the grieving families in Arizona.