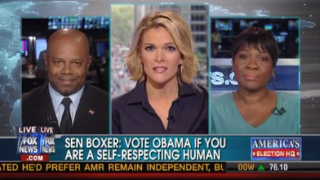 You know what it’s like when you’re trying to discuss a moment on a TV show you watched the night before and the person you’re talking to just keeps saying, “Oh, that show sucks. That show sucks.” It becomes clear pretty quickly that the conversation really just ain’t going anywhere. That’s the same feeling one could get watching a recent Fox News “debate” on comments made by Democratic Sen. Barbara Boxer. It appeared to me, Fox News contributor Jehmu Greene felt she was there to discuss the merits of what Boxer said whereas her sparring partner David Webb and anchor Megyn Kelly seemed to think that the topic was actually how much of a stupid jerkface Boxer is. Whoops!

Here are the offending comments Boxer made while on the campaign trail:

“I got to say to the women out there, whether you’re a Republican, a Democrat or Independent, if you’re a self-respecting human being, please vote for President Obama. And for the men who care about women, do the same thing.”

Webb translated this statement as saying that the Democrats don’t think “women are smart enough to make up their own minds.” Kelly seemed to agree, asking Greene if telling people they “aren’t informed” is a way to win votes. Greene said she disagreed that that was the message but rather than Boxer was saying that Republicans are striking down women’s rights, pointing to Gov. Scott Walker’s recent repeal of Wisconsin’s Equal Pay Enforcement Act. Webb was having none of this, telling Greene she was “ridiculous.”

When the two began arguing over which party was hurting women more, Kelly quickly cut in to remind everyone that “that discussion on whether there was a War on Women” seemed to be “yesterday’s, last week’s, the day before” debate.

She then began explaining how many emails she got from people who were “ticked off” over “narratives” like the one Boxer was apparently using. As she described how Boxer was deliberately making women feel “stupid,” Webb kept nodding, his grin wide enough to finally connect the long-lost siblings that are his ears (“How do you do, Mr. Right Ear? I’m Mr. Left Ear! It’s so nice to meet you! I’m so glad the thoughts in the head we’re on are being validated without question during this totally objective news segment!”)

However, soon Webb and Greene were debating equal pay again. Kelly stepped in, telling her guests that the producers don’t like it when people talk over each other. Fortunately, she had a much topic contentious to discuss; how Boxer has a history of being a jerk. She asked Greene about this, pointing to the time Boxer asked a General to address her by her title as a Senator. When Greene pointed out that Boxer should be addressed as Senator the same way Republicans should really start Barack Obama “President,” Kelly snippily pointed out that she hadn’t answered the question.