Will Mitt Romney’s ‘Obama-Osama’ Problem Dog Him In This Election? 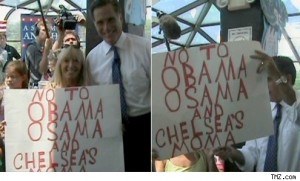 Buzzfeed‘s Andrew Kaczynski has dug up a rather inconvenient photo from Mitt Romney‘s last presidential campaign, in which he poses with a sign that says “Say No To Obama, Osama, and Chelsea’s Moma (no, Chelsea Clinton does not own a Museum Of Modern Art, that’s just how these people spell),” which the candidate laughed off as a “joke” in July of 2007. That, and the video we found of Romney “confusing” then-Sen. Barack Obama with Osama bin Laden, are embarrassing on a number of levels, not the least of which is the number that Obama and Chelsea’s mama did on Osama, a move Romney said he wouldn’t have made in 2007.

It’s been a campaign of ruff optics so far, and while the sight of Romney posing with a nasty sign like that probably pleases the conservative base he so wants to excite, it serves only to remind other voters that President Obama and Secretary of State Hillary Clinton were sitting front-row when Seal Team Six punched bin Laden’s ticket. Ditto this clip from 2007, in which Romney “confuses” Barack Obama with the now-fish-feeding terrorist:

Bet he doesn’t get them mixed up now, huh?

What voters might not know is that the same Mitt Romney who conceded the nomination to John McCain in 2008 by suggesting that Barack Obama would “surrender to terror” also heavily criticized Obama over his promise to do exactly what he did: go into Pakistan and kill bin Laden, whether the Pakistani government liked it or not.

Late last year, Romney sang a different song, telling NBC’s Chuck Todd “I think in a setting like this one where Osama bin Laden was identified to be hiding in pakistan, that it was entirely appropriate for this president to move in and to take him out,” adding that “In a similar circumstance, I think other presidents and other candidates, like myself, would do exactly the same thing.”

Keep in mind that then-Sen. Obama couldn’t have described this setting better, in 2007, than if he were Miss Cleo:

While Barack Obama’s rivals attacked him vigorously over the statement at the time, not all of them did so on the basis of opposition to unilateral action. What did Mitt Romney say then? A source from Priorities USA Action points out that he said this to Reuters at the time:

Still, Romney can always argue that we don’t need a president like Barack Obama anymore, now that Barack Obama has killed all of the terrorists. Maybe his slogan should be “Osama Isn’t Working.”