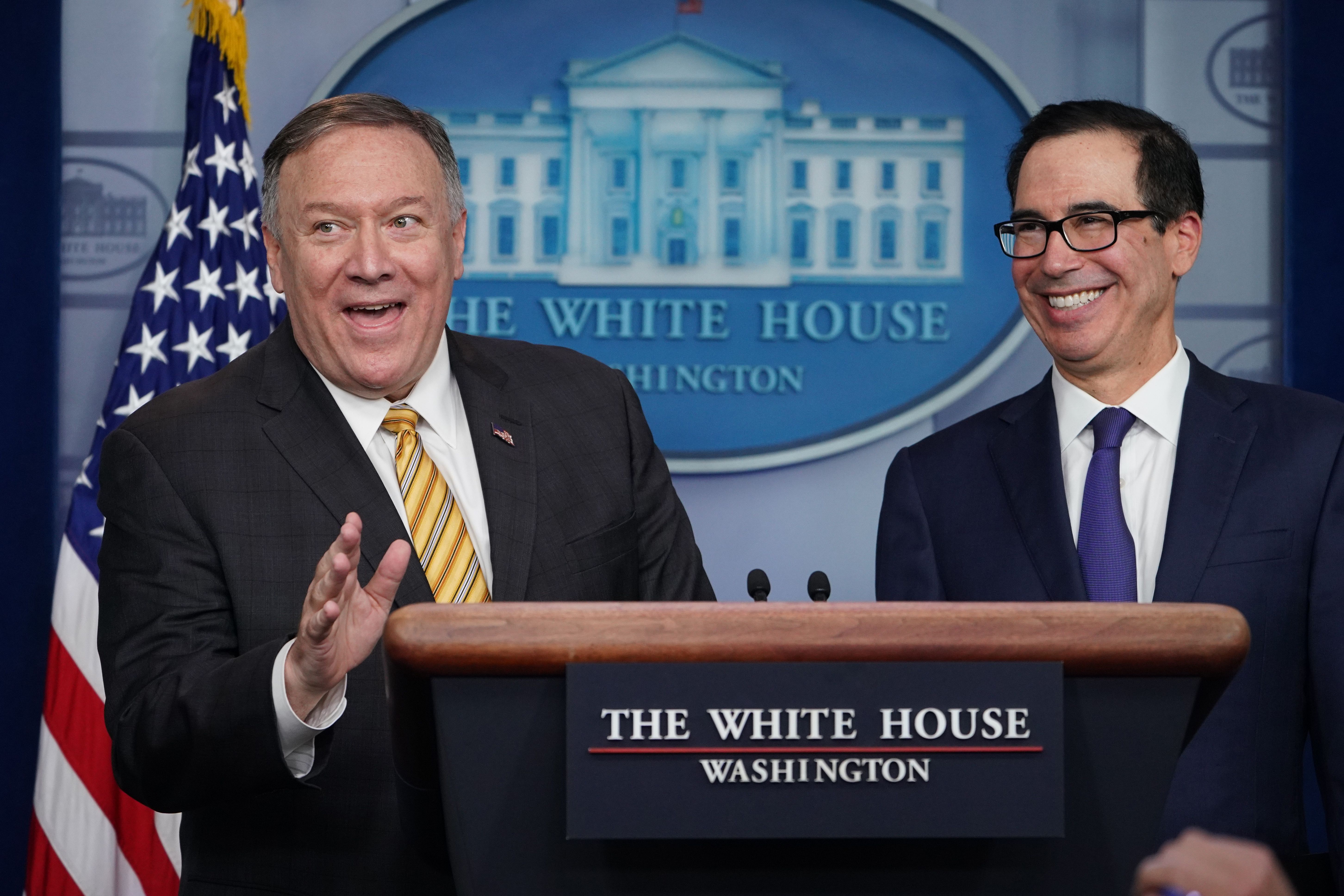 Despite watching a colleague lose their job on Tuesday, Secretary of State Mike Pompeo and Treasury Secretary Steve Mnuchin were smiling ear-to-ear at a White House briefing just after John Bolton’s axing was made public.

Pompeo did not provide much commentary on President Donald Trump announcing that he had fired Bolton via tweet, but he clearly was not shocked, telling reporters, “I’m never surprised.” That’s despite the fact that the fired national security was scheduled to be a part of the presser just hours before Trump’s surprise announcement. The secretary of state also admitted that “there were many times Ambassador Bolton and I disagreed.” 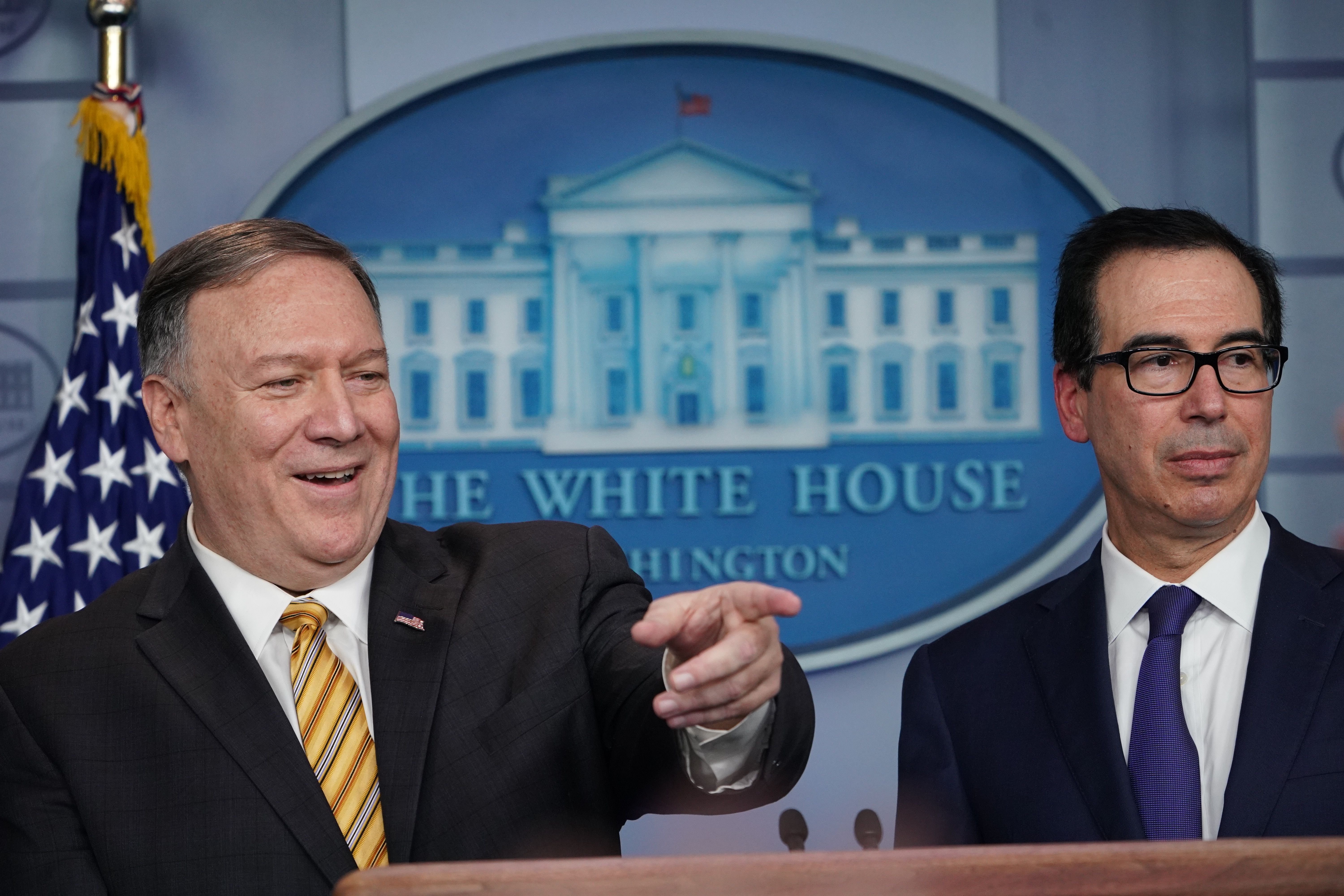 Trump explained Bolton’s as national security advisor removal in a tweet noting that he “strongly disagreed with many” of Bolton’s policy proposals; Bolton responded by writing a tweet of his own: “I offered to resign last night and President Trump said, ‘Let’s talk about it tomorrow.'”

Pompeo insisted that Trump is “entitled to the staff that he wants at any moment — he should have people he trusts and values, and whose efforts benefit him in delivering American foreign policy.”

Amid discussing the day’s Trump administration shake up and U.S. foreign policy going forward, Pompeo seemingly could not contain his giddy-ness as reporters peppered him with questions about the chaos. He and Mnuchin broke into smiles and even laughter on several occasions while answering questions from a raucous press corps. 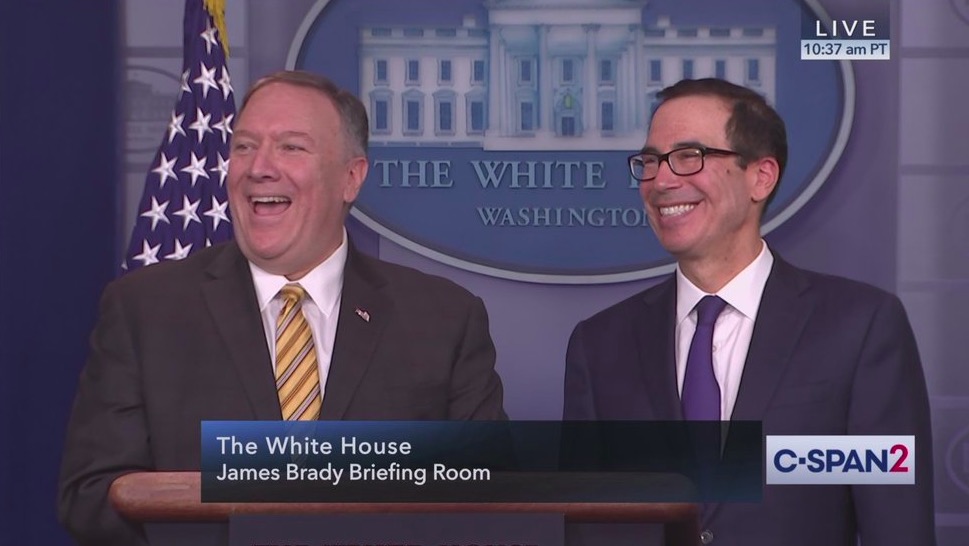 Check out a few of the media reactions to Pompeo’s relatively ecstatic mood hours after Bolton received the boot:

Spare a thought for their obvious heartbreak! https://t.co/V033HXuacs

Pompeo looks like a happy man at the White House podium.

Sometimes a picture really is worth a thousand words…#Bolton pic.twitter.com/S4xwmRp382

As evidenced by Mnuchin’s cheery demeanor at the podium, there’s no love lost between him and Bolton.
Beyond Pompeo, Bolton and Mnuchin clashed repeatedly on a range of issues.
Most of all on Treasury sanctions actions, in particular re: Venezuela, per multiple sources

Secretary Pompeo, barely suppressing a smile several times so far this briefing: “There were many times Ambassador Bolton and I disagreed. That’s to be sure.” pic.twitter.com/UIVj18Wau2

Has Mike Pompeo ever answered so many questions from reporters and so happily?