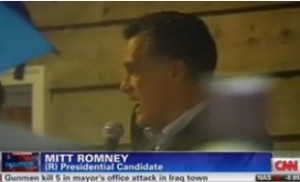 Apparently encouraged by the presence of stand-up comedian Jeff Foxworthy, former Massachusetts Gov. Mitt Romney busted out his own comedic chops at campaign stops in Alabama and Mississippi on Monday, joking about hunting, fishing, and…voter fraud. Touting the coveted “You might be a redneck” endorsement, Romney told the crowd, “We’re going to get this thing won. Jeff Foxworthy is going to make all of the difference in the world, and you voting multiple times could really make a difference. Just kidding. Good to be with you.”

A Romney campaign spokesman later added “Governor Romney urges voters to tip their waitresses, and furthermore, to enjoy the buffet.”

Okay, I made up that last part.

While it’s tempting to give Romney credit for trying, that isn’t just the oldest joke in the book, it’s the oldest joke in the Book of Mark, in which, upon hearing that King Herod has ordered him beheaded, John the Baptist says “But I voted for him twice!” (little known fact: Herod barely edged Ron Paul in the primary that year)

But enough kidding. Voter fraud jokes are actually a lot funnier when they’re not told by people whose party is engaged in a systematic campaign to disenfranchise voters in order to drive down turnout among key Democratic constituencies. Contrary to Romney’s joke, people voting multiple times actually doesn’t make a difference, because it is extraordinarily difficult to do. What does make a difference, and is a lot easier, is enacting restrictions on voter registration requiring specific forms of identification that large numbers of your opponent’s supporters don’t have. Voting is a fundamental right in our democracy, not a privilege like going on an airplane, and without compelling evidence to suggests that these laws are necessary, they should be opposed by all freedom-loving Americans.

Thanks, I’m here all week. Here’s the clip, from CNN: