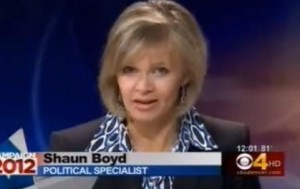 The Republican presidential ticket’s Todd Akin tragedy has now entered the third stage, bargaining. In a comical effort to wish the Akin story out of existence, Republican presidential candidate Mitt Romney forced Denver CBS reporter Shaun Boyd to agree not to ask any questions about the Todd Akin controversy, or the issue of abortion. The Democratic National Committee and the Obama campaign leapt on the news with relish, distributing the video, and a brief memo, to reporters.

From the Obama campaign:

The Denver CBS affiliate today reported that, as a condition for a one-on-one interview with Mitt Romney, they had to pledge to not ask Romney about either Todd Akin’s recent comments or the topic of abortion.

It’s no surprise why. On Tuesday, the Republican Party’s officially endorsed the Akin amendment, which would ban abortion for all women, including rape victims, and Paul Ryan has struggled to explain his support for redefining rape. Mitt Romney’s campaign might be able to muzzle reporters from asking tough questions, but women across America deserve to know the truth about Romney-Ryan’s extreme agenda.

Transcript: (via Obama for America)

Reporter: “And political specialist Shaun Boyd just finished an interview with Romney, just literally a couple of minutes ago. Shaun’s with me now. And Shaun, you were one of only four local reporters to get to talk to him. And, what did you ask him?”

Reporter Shaun Boyd: “You know, I had about five minutes with him, and we got through a fair amount of material, actually, in that five minutes. The one stipulation to the interview was that I not ask him about abortion or Todd Akin – he’s the Missouri Republican who created a firestorm after saying women’s shut down in a legitimate rape to prevent pregnancy. I did ask him about health care, the female vote, and energy.”

Todd Akin has mired Mitt Romney and Paul Ryan, and really, the entire Republican Party, in the weirdest political panic ever: the dreadful possibility that voters will actually find out what they believe in. This week has seen breathless reporting on a Republican Party plank that’s been the same for over 30 years, as well as details of Paul Ryan’s heinous beliefs about rape and abortion, and Mitt Romney’s slightly-less-heinous-because-you-never-really-know-what-they-are beliefs on the subject.

With Ryan unable to plausibly address the issue even in 15-second increments, perhaps Romney is wise to institute this self-gag order, reasoning that the horrible press he gets for it wouldn’t be as bad as whatever answers he might have given on the subject. However, the plan lacks any long-term vision, as most national reporters aren’t likely to agree to such a deal, they’re not going to stop asking, and Romney’s answers don’t figure to get much better.

Also worth noting is that negotiations over interviews are normally kept off the record, which means that this time, the Romney campaign either forgot to ask, or Boyd refused to keep it off the record.