Morning Joe Takes On Mike Bloomberg’s Future: ‘How Badly Does He Want To Be President?’ 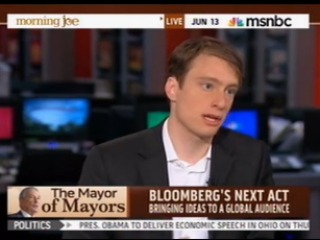 On Wednesday, the Morning Joe panel turned its attention to writer Gabe Sherman‘s new New York Magazine article looking at New York mayor Mike Bloomberg‘s goal of ultimately becoming “mayor of the world,” overseeing and deciding issues such as, as Sherman listed, where people can smoke, what they should eat and drink, how much companies can pollute, and how schools educate their children.

“How badly does he want to be president of the United States?” asked host Joe Scarborough.

“I mean you see it,” said Sherman. “There is no love loss between the Mayor and the White House and, you know, they try to set up meetings. The golf game, you know, meetings back channel. Bill Daley reached out to the Mayor to see if he wanted to be president of the World Bank. I mean, there have been efforts to kind of bridge these camps. Mike Bloomberg has the ambition and believes he has the skill to be president of the United States. ”

“And the other side of that is, he just doesn’t think Barack Obama has the skill to be president of the United States,” Scarborough added.

“It’s the experience question,” said Sherman. “This goes back to people who look at the President, people in Mike Bloomberg’s circle who say Mike Bloomberg has much more business experience, he has more political experience than this President.”

“He has an infrastructure in place as well,” added host Mika Brzezinski. “And, I mean, a staff and political experts.”

Sherman also made note that “the big unanswered question” is that of whether Bloomberg will purchase the New York Times, referring to it as “a trophy that Mike Bloomberg wants that would give him instant credibility and cache on the global stage.”