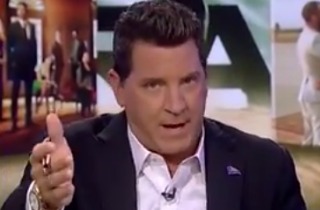 The Five‘s Eric Bolling really loves the FX show Tyrant, and today he took on the Council on American Relations and spokesman Ibrahim Hooper in particular for criticizing the show as an exercise in Muslim stereotypes. Bolling said that beyond just having a different opinion of the show than him, CAIR’s assessment is way off and if they think there are no good representations of Muslims, they’re not watching the show.

Bolling quoted Hooper saying Muslims are “devoid of any redeeming qualities” in the show and that “even the ‘good’ Arab Muslims are bad.” Bolling argued “there are a lot of good Arab Muslims in the show” and asked Hooped, “You haven’t watched the show, have you, sir?”

He also pointed to a character he described as a “peace-loving kind of guy” and said Hooper probably didn’t see that either.

CAIR responded on Twitter today by tweeting out a video of the segment with a headline reading that Bolling’s claim is entirely false.

The Hooper quote Bolling read out came from a press release that was issued specifically after a screening of the pilot episode that, according to the press release, Hooper attended.

The press release (which was issued weeks ago) does note, however, that Hooper was assured by producers that future episodes would be more “nuanced.”

You can watch the Five segment here, via Fox News: