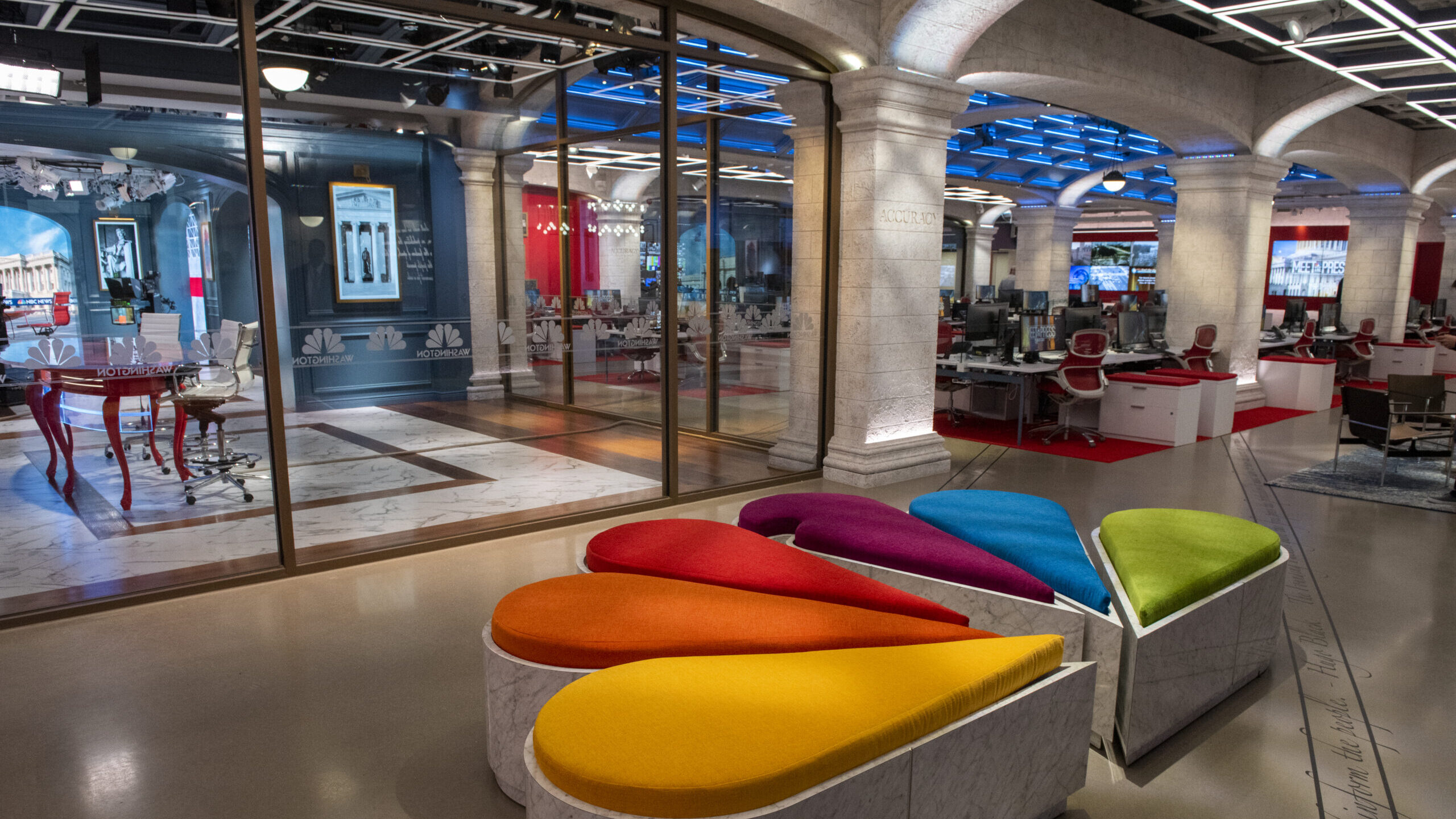 The start of the new year means newly-improved digs for NBC’s Washington bureau, which debuted its new studios and expanded space on the Jan. 24 episode of Meet the Press.

NBCU News Group is moving its Washington-based operation after more than 60 years in the studios at 4001 Nebraska Ave., which were formally dedicated in 1958 by President Dwight Eisenhower. The new space will cover six floors and more than 80,000 square feet, and house seven studios for programming across NBC News, MSNBC, and CNBC. Spanish-language Noticias Telemundo and Sky News will also run their Washington operations out of the bureau.

The new space will house more than 400 employees, although more than 90% of NBC’s workers will continue to work remotely through at least the second quarter of 2021, due to the coronavirus pandemic.

“This is an outstanding new home for our Washington-based journalism and broadcasting,” said Cesar Conde, Chairman of NBCU News Group. “I’m looking forward to the day when we can all safely collaborate and work together in person in these new spaces.”

Meet the Press, the longest-running show in television history and the top-rated Sunday news show for five years running, will look to build on its legacy in the new space. “For more than seventy years, Meet the Press has been the place where presidents, policy makers, foreign leaders, and those in power have come to speak directly to American viewers,” said Meet the Press moderator Chuck Todd. “This year, we will continue to be the gold standard of Sunday public affairs programming with the same sensibilities and mission, only now from a 21st century studio with the latest technologies and broadcast capabilities.”

Nine shows will broadcast from the new bureau, including Meet the Press and Weekend Today on NBC.

MSNBC’s The ReidOut with Joy Reid, MTP Daily, Andrea Mitchell Reports, MSNBC Live with Hallie Jackson, Way Too Early with Kasie Hunt, The Cross Connection with Tiffany Cross, and The Sunday Show with Jonathan Capehart will also be run out of the new Washington bureau, in addition to special programming for both NBC News and MSNBC.

According to a NBC, the design of the bureau aims to match the architecture found throughout Washington. High ceilings are meant to recall the famed Union Station’s Main Hall, and columns featuring words like “Accuracy,” “Courage,” “Freedom,” “Truth,” and inspiring quotes from former presidents, authors, and scholars are etched into columns throughout the bureau. Floor-to-ceiling windows around the main first floor studio will allow the public to witness live broadcasts, similar to Studio 1A at 30 Rockefeller Center at NBC’s headquarters in New York.

“It was important to us to balance the federal-style architecture with the unique modern finishes and latest technologies to break from the generic feel of many modern workspaces,” said Marc Greenstein, Senior Vice President of Design and Production for NBC News and MSNBC. “Plus, creating expansive windows across the first floor studios and newsroom also reflects the importance of journalistic transparency.”