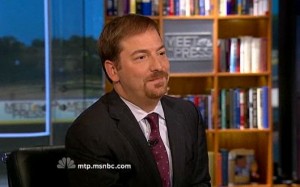 NBC chief White House correspondent Chuck Todd sat down with Meet the Press’ David Gregory to discuss, among other things, the possibility of either radio host Rush Limbaugh or former Alaska governor Sarah Palin winning the GOP nomination. Gregory kicked off the conversation by pointing to Palin’s recent Newsweek cover story, where she shares that she would be able to win a national election.

Todd ventured to guess that this is merely symptomatic of Palin not wanting be remembered for, say, her “blood libel” gaffe at the height of the media frenzy surrounding the tragic shooting in Tuscon — much of which was focused on Palin:

I’m not going to pretend that we never… to try to crawl inside and see if she was going to do things predictably, the way other presidential candidates do is a mistake. It feels like she is simply trying to go out on her own terms. You know, she didn’t want the Tucson response that she made when she called blood libel and all those things after the Gabby Gifford shooting to be the lasting impression of Sarah Palin, 2011.

If she’s not going to run, she wants to be able to have that be the message, “I could win.”

Columnist Eugene Robinson chimed in that Palin was a “gadfly” and noted that he’s not quite sure where her current path will take her.

Have a look at the interview, via NBC: