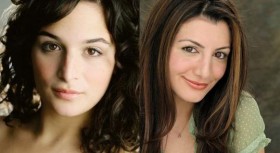 It’s September, which means the countdown to the return of network stalwarts is underway – and for comedy nerds, the return of Saturday Night Live on September 26, 2009, is eagerly awaited. Last year saw the departure of Amy Poehler from SNL in a rhyme-dropping big-bellied moose-busting finale, and Kristen Wiig took the mantle of female MVP, clocking by far the most screen time of any cast member last season. This season, she’ll have some relief: two new cast members, comediennes Jenny Slate and Nasim Pedrad.

Over at The Comic’s Comic, Sean McCarthy is reporting that Slate (above left) and Pedrad (above right) have been hired to join the cast for the 35th season, citing “knowledgeable folk” as sources. (We’ve emailed SNL for confirmation but have not yet heard back; that said, in our experience, SNL official releases tend to lag quite a bit behind comedy-circle gossip – see how the news trickled out about last season’s hires Bobby Moynihan and Michaela Watkins and Abby Elliott.)

If true, that brings the ratio to 4:3 – perhaps the best for women in SNL’s 35-year history.  (It also sends the hotness factor through the roof – they are both quite lovely! Add to that the rumor that Megan Fox is hosting the season opener, and SNL just got that much more crushable. And yes, we’re including this smokin’ hairless pic of Will Forte in for good measure.) Last season the ratio was 8:4 – 9 if you counted Weekend  Update anchor Seth Myers. So, you go, girls.

It’s hardly a surprise that the new hires came in from UCB (Slate in NY, Pedrad from UCBT-LA/Groundlings) – that’s the usual SNL farm team at this point, from which Moynihan, Watkins and Elliott were drawn, as well as fellow castmember Casey Wilson. SNLers are often seen yukking it up across the UCB stage; UCB den mother Poehler was one of the founders, and through her as well as fellow SNLers like Myers and Jason Sudeikis, the two worlds have overlapped more and more in recent years (Poehler’s longtime improv pal, Tina Fey, has also drawn liberally from the UCB well, most notably in Jack McBrayer, aka 30 Rock‘s Kenneth the Page.) At least one new writer has been culled from the UCB circuit for this coming season, according to our own “knowledgeable sources” – Christine Nangle, a UCBT Harold team member (see her work here).

No official announcements have been made but there have been rumors swirling for a while that Darrell Hammond was leaving the show;  he has provided valuable impression work in his run – particularly last season during the election – but as the longest-running cast member, he probably also comes with a steeper price tag than the raw new blood. That said, cast members frequently drop in for one-show cameos/paydays – considering Bill Clinton‘s recent newsmaking trip to North Korea, we may see him crop up sooner than the rumblings would indicate.

Either way, we’ll know soon – SNL kicks off on September 26th and the Thursday Weekend Update stand-alone show debuts again on September 17th. Presumably our people will be more knowlegeable by then; in the meantime, learn more about Slate and Pedrad at the Comic’s Comic here, and take the rest with the appropriate grain of salt.