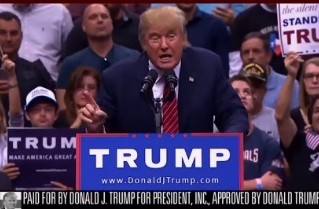 One of the big political stories of the holiday news dead zone was Donald Trump‘s stated intention to begin running millions of dollars worth of TV ads in Iowa and New Hampshire, but as it turns out, he needn’t have bothered. Early Monday morning, news outlets jumped at the chance to metaphorically paint Trump’s fence for him, but unlike Tom Sawyer‘s crowd-sourced work product, Trump’s will be used to keep Mexicans and Muslims at bay.

Trump promises to make Mexico pay for that wall, but if it ever gets built, America’s news networks will have pad for much of it in the form of millions on free advertising. First to grab Donald’s brass ring was CNN, which aired most of Trump’s first TV ad of the campaign hot off the presses at 5:30 am Eastern:

It doesn’t even appear that anchor John Berman even had a chance to watch the spot before it was aired, let alone make sure it didn’t say anything offensive like “let’s ban all Muslims” or something.

Next up was MSNBC, which proudly touted their airing as “the first time” the ad would be shown in its entirety. The Morning Joe crew reacted with amusement at the way Trump “rings all the bells”:

In fact, by the time Fox News got around to showing the ad, MSNBC was already on its second showing.

The ad is everything you would expect it to be; promoting Trump’s proposed ban on Muslims while repeating the media-abetted talking point that there’s something magical about the words “radical Islamic terrorism,” and rehashing Trump’s day one promise to wall off all those dirty Mexican rapists. It is, to put it simply, every bit as disgusting as Donald Trump’s campaign has been.

I’ve been at this a long time, so of course I know that campaign ads get covered, but this is no ordinary ad, and it is not receiving ordinary coverage. CNN at least had the restraint not to show the entire thing, but MSNBC aired it just as if Trump had paid them to air it, and likely will do so every hour today. The “analysis” will likely continue, as it has, to consist entirely of the ad’s impact, rather than its content. This is pure dissemination, and it would cost any other candidate more than they could ever afford.

I don’t think Trump will win the presidency (he will win the GOP nomination, though), but aside from making overtly racist politicking fashionable again, I believe that Trump’s true impact will be to spawn a rush of imitators who will seek to capitalize on his “earned media” model. MSNBC, in particular, has shown absolutely no restraint in its promotion of Trump, but there’s no outlet that hasn’t served as amplifier to his message. This model is so powerful that it’s worth the risk associated with trying to catch lightning in a bottle. Maybe President Oprah Winfrey will be a damn sight better than Trump, but only if she can manage to drown out Nugent 2020.