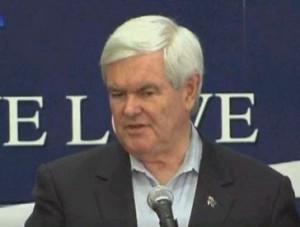 One of the issues Newt Gingrich is most vigorously defending on the campaign trail is his position on climate change, following the advertisement he filmed several years ago for Al Gore‘s nonprofit organization alongside Nancy Pelosi. Gingrich has said repeatedly over the course of this campaign that he considers the ad the biggest mistake of his political career, but his opponents are still using the video in their attack ads.

During a town hall in Iowa today, Gingrich was asked by a supporter to clarify his position on global warming. The candidate immediately stated that global warming “hasn’t been totally proven” and even if it were, he would still oppose a cap-and-trade solution to combat carbon emissions which, as Gingrich argued, would “turn… over the entire economy to the EPA.” He offered the following analogy to explain his position.

“The Dutch face the problem of oceans. They decided to build dikes instead of lowering the sea.”

Gingrich touted his conservative credentials on opposing cap-and-trade by citing a testimony he delivered before the House of Representatives following a testimony by Al Gore. Referring to the negative attack ads his opponents have used to accuse him of anything else, he dismissed them as “a plain lie.”

And then, in a rather bizarre offshoot, Gingrich bragged about his own personal experience studying the history of the Earth’s climate.

“I, also, am an amateur paleontologist, so I’ve spent a lot of time looking at the earth’s temperature over a long time, and I’m a lot harder to convince than just looking at a computer model.”

So if we’re keeping track now, Newt Gingrich is both an amateur historian and an amateur paleontologist. All he needs is a fedora and a whip, and we’ve got ourselves a real-life Indiana Jones here! (Yes, Indy was technically an archaeologist, but let’s not ruin what could be a great franchise reboot here.)

RELATED: Meghan McCain: If We Nominate Gingrich It Is ‘The End Of The Republican Party’