Nick Viall is Back in Bachelor Nation for the Fourth Time, and as Expected, There’s Lots to Discuss

Nick Viall is Back in Bachelor Nation for the Fourth Time, and as Expected, There’s Lots to Discuss 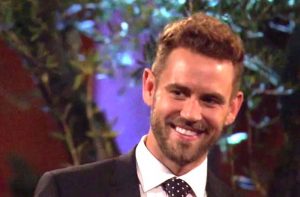 As I always say, if at first you don’t succeed, go on The Bachelor three more times. Last night was the much-hyped premiere of Nick Viall‘s fourth attempt at love within the franchise. If you’ve watched the show in the past, people are very opinionated about him- he’s not quite what you’d call a fan favorite. If not, no matter, because they reintroduce him and his family, and Nick tells us that he’s “gonna give America a happy ending.” Yep.

Then Nick gets some advice, from former Bachelor contestants Ben Higgins, Chris Soules, and Sean Lowe which was…curious. For a multitude of reasons. Nick knows the show better than all of them at this point, probably including Chris. Also, The Bachelor isn’t known for fostering the most successful relationships. The Internet agreed:

Why is Chris giving advice ?#TheBachelor

Nick really needs advice from Sean, Ben, and Chris. He’s been around longer than most of them. #TheBachelor pic.twitter.com/VgKwRoZAXW

The entrances and descriptions of the women have gotten more outrageous, obviously. They’ve also stopped making sense. Alexis, whose description is “aspiring dolphin trainer” came out of the limo in a costume that looks curiously like Left Shark’s.

The “Aspiring Dolphin Trainer” thinks sharks are dolphins. She’s going to be really confused if she fulfills her aspirations. #TheBachelor

A woman named Lacey made her entrance on a camel, because she heard he “likes a good hump.” So…there was that. Additional important entrances were made by Jasmine, who showed up with Neil Lane to show Nick her ideal engagement ring, which is always a good way to introduce yourself to someone you’ve never met. Last but not least is Liz. Liz and Nick actually already know each other- they’ve slept together. Their interaction was…awkward. When Liz got out of the car, she didn’t mention they knew each other. So then he didn’t say anything, but you could tell he knew her. Then, Liz called him out for not knowing who she was, so Nick called her out for not pursuing him off camera. The Internet went wild and the whole did he or didn’t he recognize her thing may never be solved.

Nick needs to ‘get to the bottom of it’ with Liz. But it sound like he already has. Ba-da-ching. #thebachelor 3ad

Kinda hilarious that Nick would be mad at Liz for not contacting him…while he was busy “making connections” off in Paradise. #TheBachelor

“I didn’t want you to think I’m here because you’re The Bachelor.”
Uh…Liz, honey? You realize where you are, right? #TheBachelor

Rachel made a good first impression with me too. She carries herself really well. So far so good #TheBachelor

Rachel getting the first impression rose gives me hope for 2017. #thebachelor

NICK HAS GIVEN RACHEL A 31 EYAR OLD BLACK LAWYER THE FIRST IMPRESSION ROSE AND I AM LOSING MY FUCKING SHIT omgggg ? #TheBachelor